The legend is back in the game! My mom's wonderful husband Tolga Savaci, award-winning actor and top-model who was the heart-throb of generations in Turkey and across Europe is getting back into acting/modeling in New York, USA. Guess who was his photographer!  It was truly so much fun working with a pro. How many men can rock the side-way glance in such a warm, believable way!

If you watched the T.V. series Kurt Seyit ve Sura (Kurt Seyt and Shura), he was the character Yahya Bey, Kurt Seyt's good friend and hotel owner in Pera, Istanbul.  You will notice that he looks quite different in real life, a testament to his talent and believable acting.

During this photo-shoot, I wanted to showcase different faces of Tolga, his expressions, and his ability to use his eyes to communicate a variety of emotions.  We created a mix of casual, fun, classy and serious looks outdoor and in the studio.

We started out with a leather jacket and jeans outdoors, then moved into the studio for a black-on-black classic head-shot look.  Then we did a variety of images with a tuxedo, sitting, standing, and on the ground, showcasing his facial acting skills and his fine physique.

As an homage to his modeling days on the cat-walk, we did some Vanity Fair style shots, too. silver hair at its best! 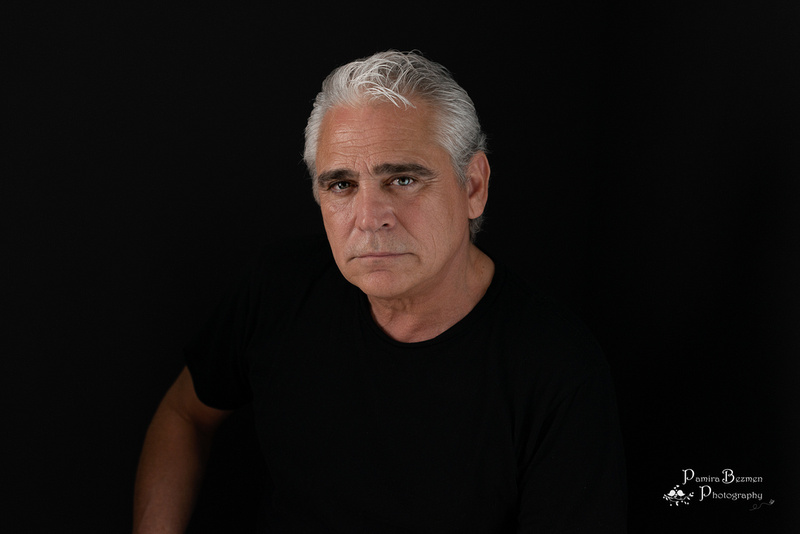 This shot reminds me of a scene from The Godfather.  Great expression that makes you wonder... Finally, we moved outdoors again to show a more summery look wearing a t-shirt and then a fine cotton shirt with white summer slacks. 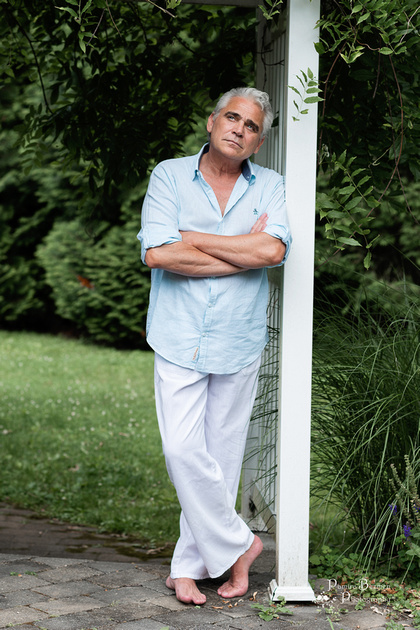 Before wrapping it all up, I asked him if he'd jump in the pool for a final look, as water is second nature to Tolga after years of being a licensed swimmer, diver and a water polo player.  We wanted his portfolio to immediately speak for his athletic side as well as his ability to go from sweet-heart to bad-boy, from elegant to sexy, from thoughtful to sensitive. I am thrilled with how Tolga's gallery came together.  I am excited that these images will represent him in New York and beyond for new opportunities.

Working with Tolga was an absolute pleasure.  We were talking, directing, acting, laughing and shooting, moving from one set to another, moving the lights around and working with many faces and looks.  I'm quite certain that any agency and photographer that gets to work with him professionally will find it equally fulfilling to partner with a pro who has so much experience and depth to offer.

Here is a behind the scenes shot from the studio, taken by my 8-year old daughter and assistant :) And for a final bonus, here is a contact sheet to show the finished product.  Pure gorgeousness!  What do you think?